In this post we will explore Generative Adversarial Networks (GANs) to create fake husky images. The goal is, of course, to have “Husky AI” misclassify them as real huskies.

If you want to learn more about Husky AI visit the Overview post.

One of the attacks I wanted to investigate for a while was the creation of fake images to trick Husky AI. The best approach seemed by using Generative Adversarial Networks (GANs). It happened that right then deeplearning.ai started offering a GAN course by Sharon Zhou.

That was excellent timing, and I signed up right away.

The course teaches the basics of GANs with plenty of examples - from building basic DCGAN to WGAN-GP and even StyleGAN. The cool thing is that the course teaches everything from scratch. I had only used TensorFlow before and this course is entirely in PyTorch, so I finally got to use PyTorch a bit as well.

What is a GAN?

If you are not at all familiar with GANs, let me give you a brief overview.

GANs were invented by Ian Goodfellow. The basic idea is that there are two neural networks, namely:

These two neural networks compete in a minimax game. 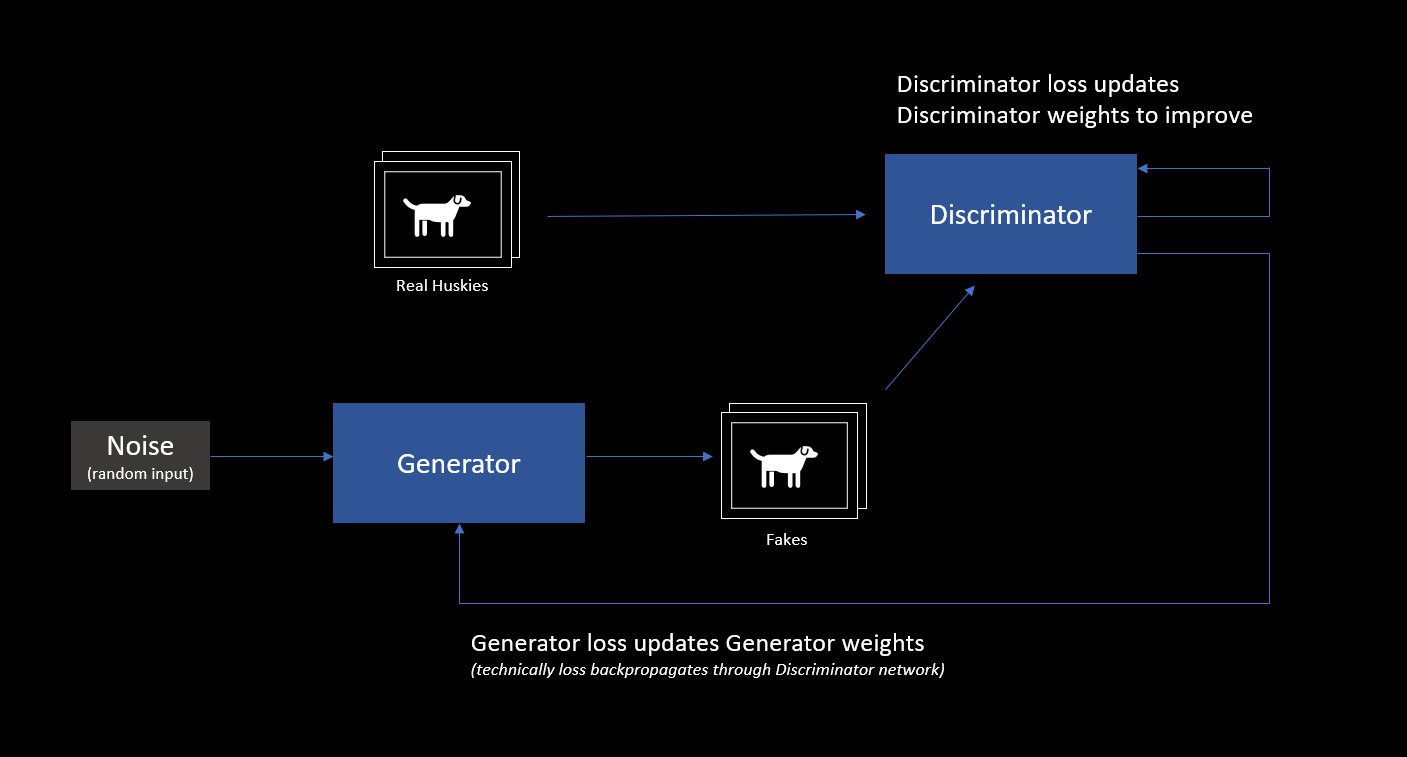 The Generator creates random images based on noise and sends them to the Discriminator. The Discriminator is fed both real images and fake images and predicts if an image is real or fake. Using the losses of these predictions (learnings) the neural networks of both players are adjusted and the game continues. Over time the Discriminator starts creating better and better images.

The following image shows my progress in regard to creating fake husky images:

The first image shows a DCGAN which failed because of a mode collapse, meaning it got stuck somewhere in a local minimum during training. The second image used a WGAN, and the third one is StyleGAN2-ADA.

StyleGAN2-ADA is especially great when you have a small training set, as it performs image augmentation. Here are the final and best results I had with StyleGAN2-ADA, look: 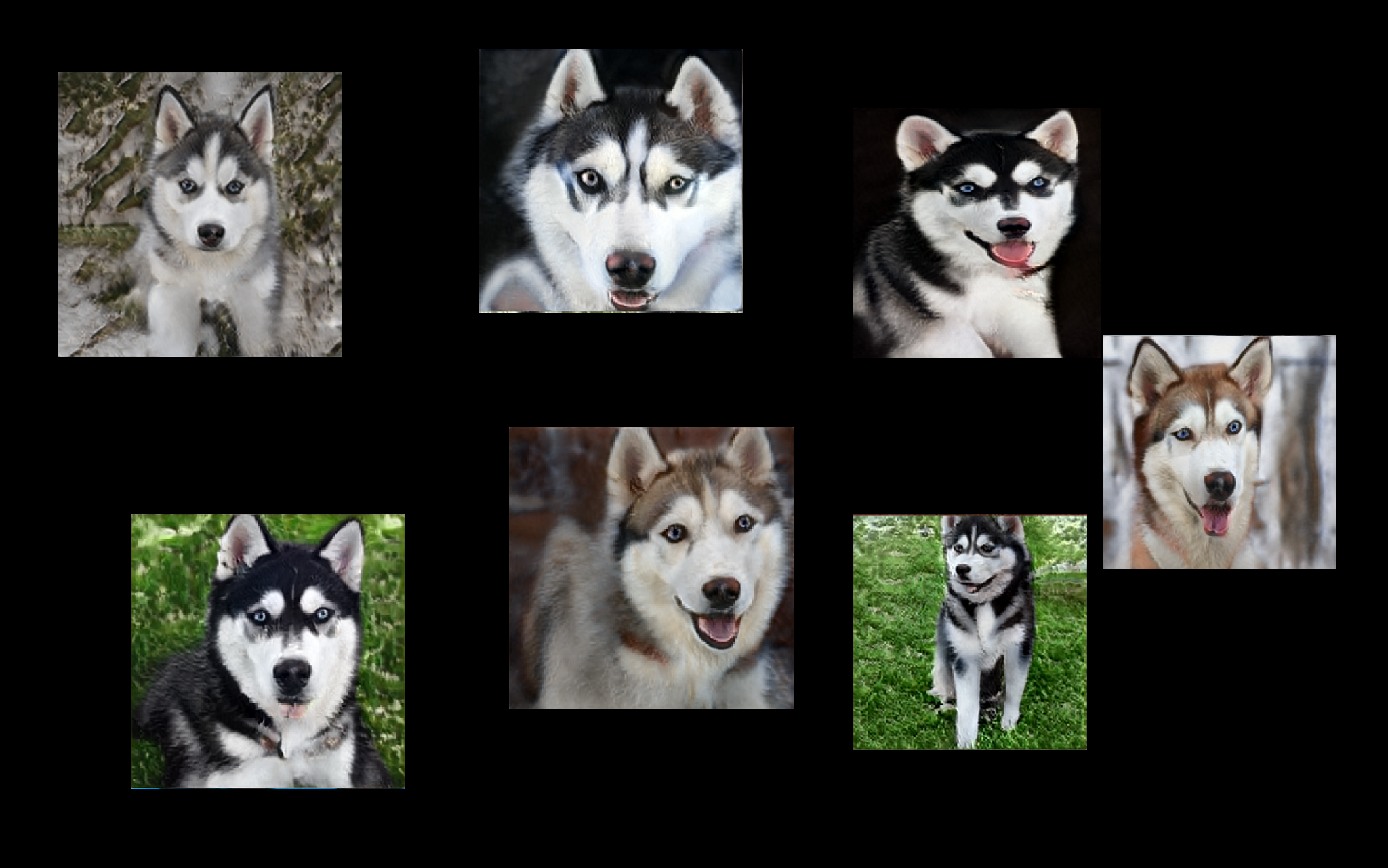 Those images look pretty amazing, and remember that none of these huskies actually exist!

Along the way during training there were also some fun images, look: 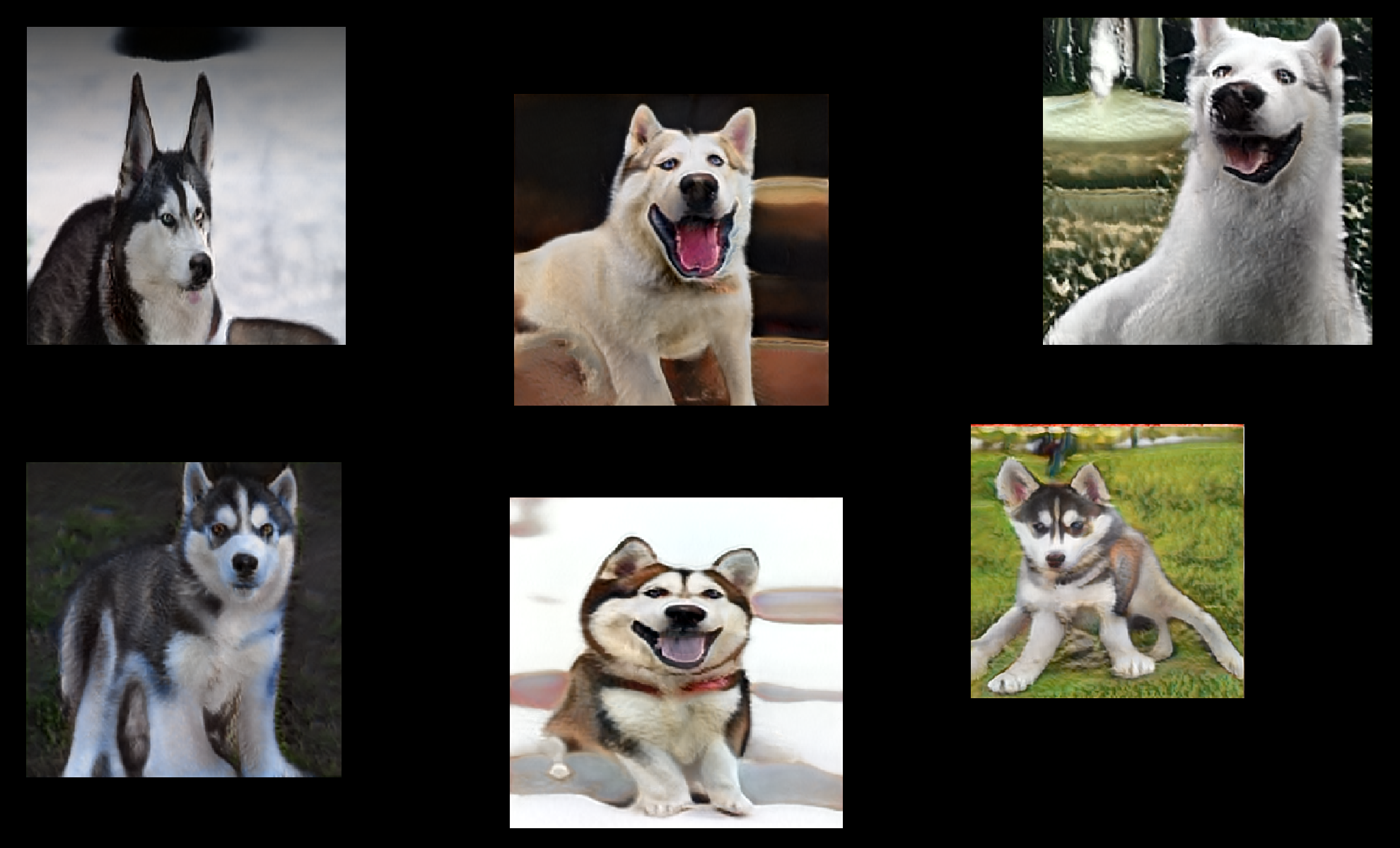 You can see how my training data was lacking pictures that showed huskies with legs, as those are commonly misaligned in the images the Discriminator created.

In the end I took one of the fake husky images and uploaded it to Husky AI. Here is the resulting prediction: 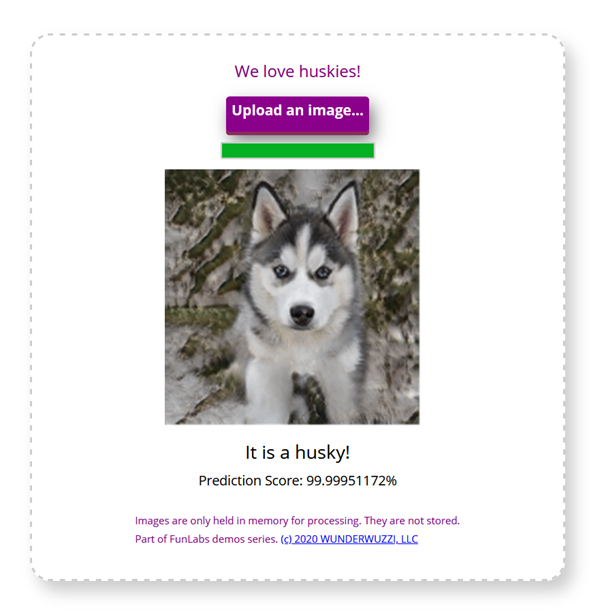 As you can see Husky AI was entirely tricked by the fake image. I thought this was a really cool attack. Although, I was wondering if this is maybe because the images for training the production model and training the GAN were the same.

So, I tried a couple of other image classification AIs out there.

What about Google’s Vision AI?

Take a look at the result: 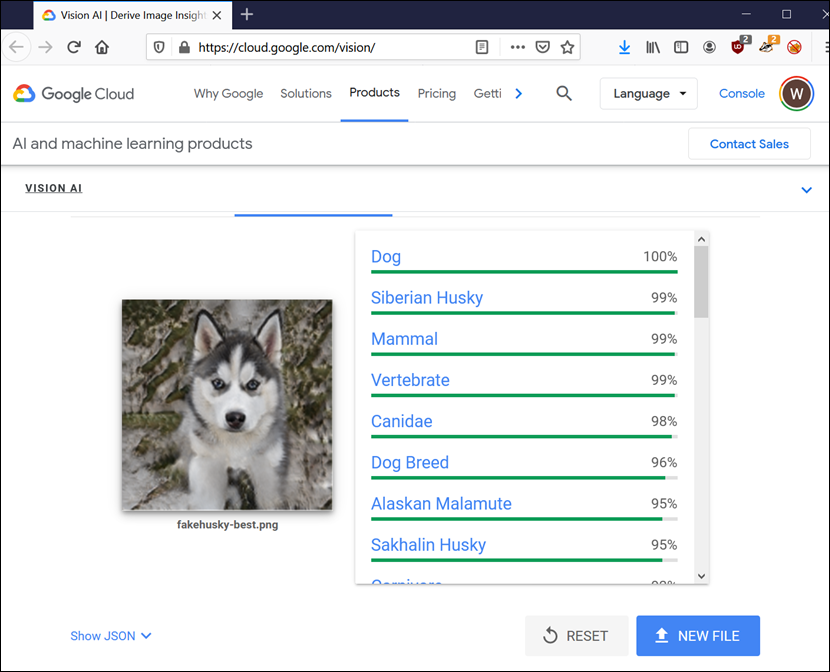 Wow, even Google’s AI was tricked.

This really shows how difficult it is already for computers and humans to distinguish between real and fake content, and the quality of fake content and images is only going to improve.

Quite scary if you think about it. A few years from now, you will not be able to trust any information, image or video you see online.

For StyleGAN2-ADA, let me show you some of the core code snippets from my Google Colab Notebook. The code for StyleGAN2-ADA can be downloaded from NVidia’s Github repo.

The first step was to upload the husky training images and pre-process them, so they all have the same size.

Next, I used the dataset_tool.py of StyleGAN2 to create images of the correct format that StyleGAN requires:

And then it was time to do the training:

It’s also possible to stop the training and resume at a later point by providing the .pkl files that are saved by StyleGAN2 along the way.

After the training, we can create new fake images.

Those are the core basic steps of using StyleGAN2-ADA.

There is also a fork of StyleGAN2-ADA by Diego Porres that can be used to create fun interpolation videos. Unfortunatley, my mp4 video doesn’t show up inline here in the blog.

That’s it. As you can see, GANs are super powerful and it’s quite easy to setup and train yourself. And as I mentioned this is all quite scary if you think about it. A few years from now, you won’t be able to trust absolutely any information, image or video you see online.