The previous four posts explained the architecture and how Husky AI was built, threat modeled and deployed. Now it’s time to start the attacks and build mitigations. The appendix in this post shows all the attacks I want to research and perform in this series over the next few weeks/months.

Let’s dive into the attacks.

The first attack I investigated is also referred to as perturbation attack throughout the literature I have been reading. It is like fuzzing (dumb or smart) to come up with malicious input that tricks a model. It is probably the first attack that one would think of when faced to hack AI/ML - besides attacking the machine learning infrastructure.

What are we testing?

The target is Husky AI, which we have discussed in the previous posts. The operationalized Husky AI model is accessible over an HTTP endpoint. It’s basically an image upload API, and it returns the prediction score. 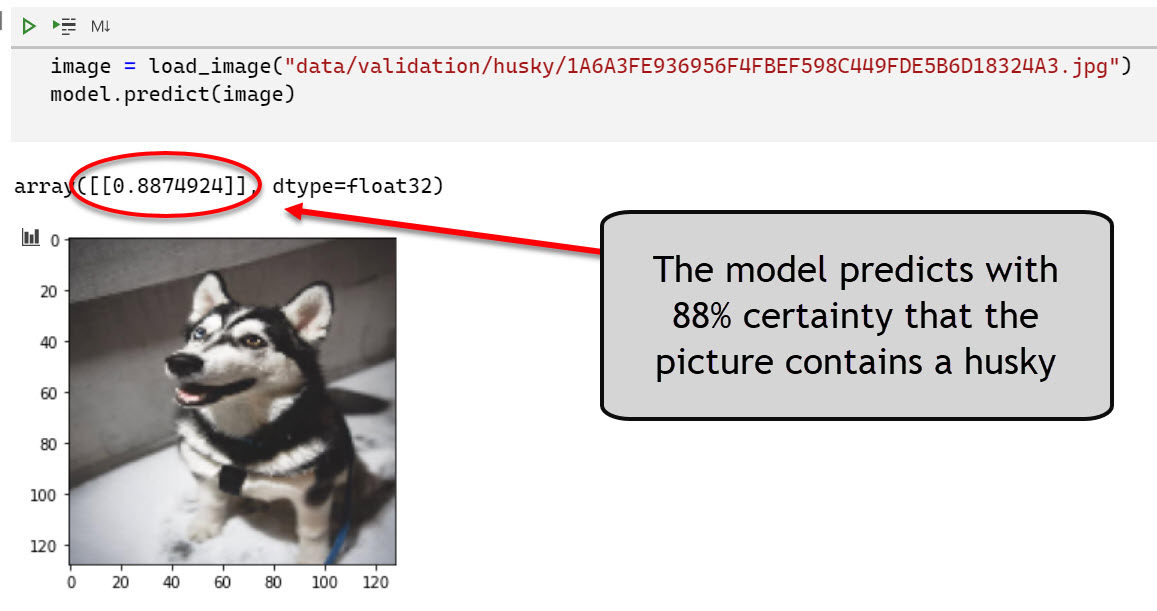 If you are curious the code for the simple web server is located here.

To interact with the API I’m using the following code:

What is happening here?

That is all that is needed to invoke the HTTP API from Python.

I’m using a Jupyter Notebook to run these attacks. Over the last couple of weeks, I really started liking the VS Code Python extension.

The validation accuracy of the model was in the mid 80% range and querying the API works well with the Jupyter notebook.

Here are two examples of calls to the API:

Equipped with a model that works decently well (or not, as we will see soon), it’s time to create images to challenge the model.

When testing software to find bugs, a good strategy is testing boundary scenarios. Hence, I thought of doing the same in this case. With machine learning there are special tools and techniques available, such as adversarial learning models, Cleverhans and others which I want to research and look at later.

The three test cases that seemed interesting initially were all 0, all 1 and images with random pixels.

Here is the code snippet I used to create these test images and run them through the prediction web endpoint:

Let us analyze the results in more detail.

The first image I created was a numpy array with all 0 - which is basically a blank black canvas. 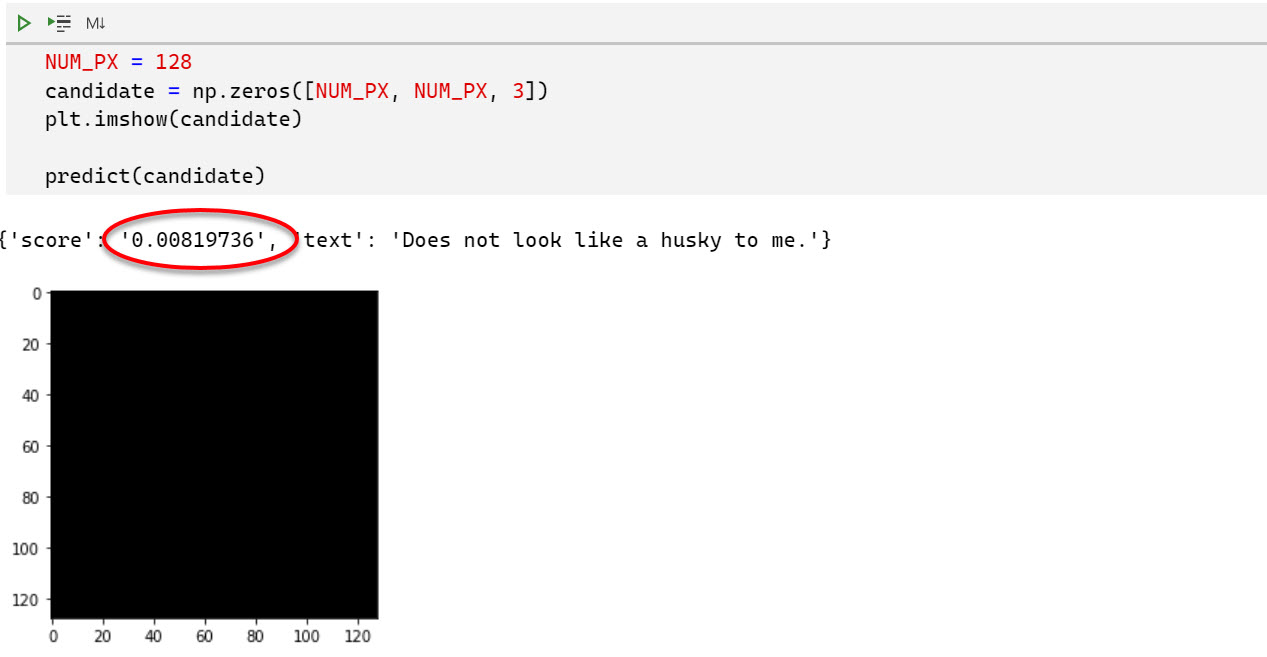 The second test case was an all-white canvas:

Oh, wow! There is the first successful attack already. Looks like the model has some issues!

Since the corner cases gave such drastic results, I went ahead to try the solid shades from 0-255 for all pixels. The results show that there is a range of 30-40 adversarial images that are huskies. So interesting.

There is still one more experiment to perform amongst these simple scenarios.

It was quite unexpected that the pervious scenarios already broke the model.

My initial plan was to create many random images in a loop until I get one that scores over 50%. However, this was not really needed. Also, for random images many are identified as husky. Look: 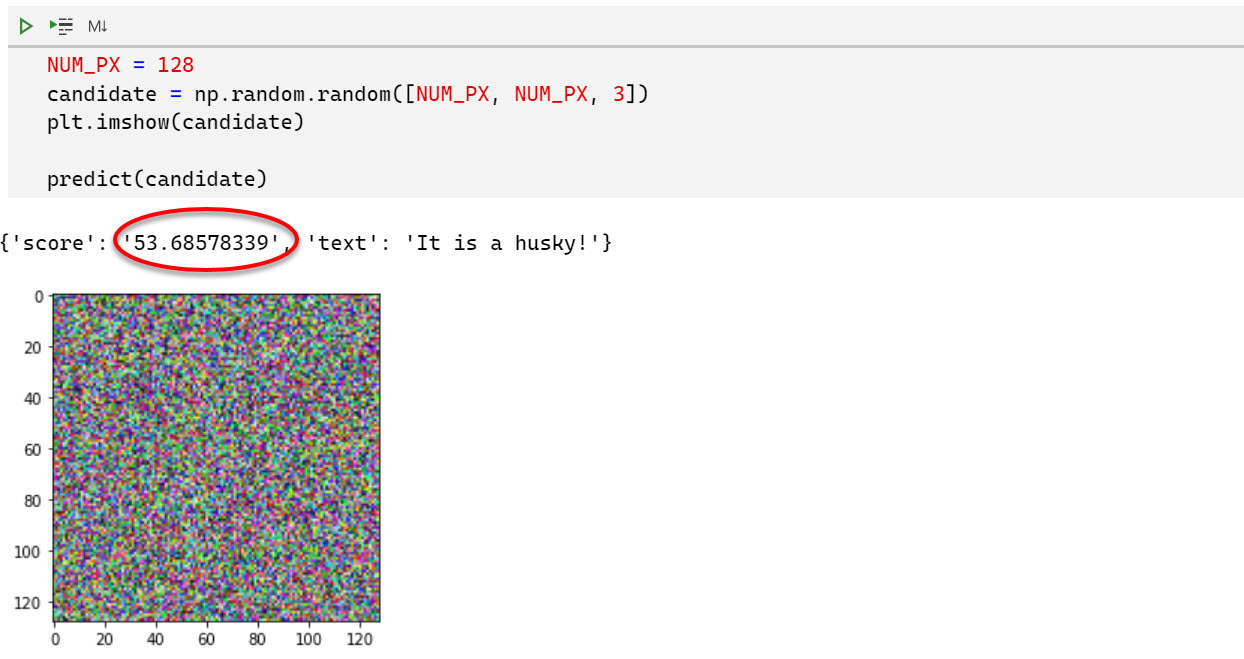 Take-away from the attacks

The initial learning for me here is that having basic “unit” tests for models is a good idea. It will be exciting to try more advanced attacks (includ ML based ones) after fixing these issues first.

Now, let’s discuss how to mitigate these issues, I had a couple of ad-hoc ideas:

The results so far are quite interesting for my learning experience. So, I want to continue that route for now.

Let’s look how I trained the model for these adversarial images:

The simple mitigation seems to be to train the model on these corner cases and teach the model that such images are not huskies.

Since I am experimenting to learn, I only trained for a single epoch initially, here are the results:

These number are still bad, so I trained for more epochs. Overfitting did not seem too much of a concern as these images are far off real huskies. I think it would further improve the model to cycle the random pixels for each epoch even.

To check I built this basic brute force script, which just creates a random pixel image and then runs it through the new model. This test was done directly against the model, not via the slower HTTPS image upload API.

With the additional training we performed, it seems quite difficult to “guess” a husky picture now.

I performed about 100000 tests and the highest score achieved via random pixels was about 30% now - still a bit high so I should probably add a few more “random pixel” adversarial examples.

Throttling the web server image upload API (which queries the model) is another good mitigation. I am using nginx as API gateway and rate limiting can be setup in the configuration file of the web site. See more information on the nginx documentation for rate limiting.

That’s it for the first round of attacks. I hope you enjoyed reading and learning about this as much as I do. I learned a lot already and am eager to dive learning smarter ways of coming up with malicious/adversarial examples.

Links will be added when posts are completed over the next serveral weeks/months.