This post is part of the machine learning attack series.

It’s been a while that I did a Husky AI and offensive machine learning related post. This weekend I had some time to try out Counterfit. My goal was to understand what Counterfit is, how it works, and use it to turn Shadowbunny into a husky.

With Counterfit you can test your machine learning models and endpoints for specific adversarial attacks.

It is basically a generic toolset that hosts attack modules from various sources and security researchers. It can also be extended with additional attacks and targets. Quite cool actually.

After launching the tool, we are greeted with Metasploit-like screen, showing number of supported attacks and configured targets. 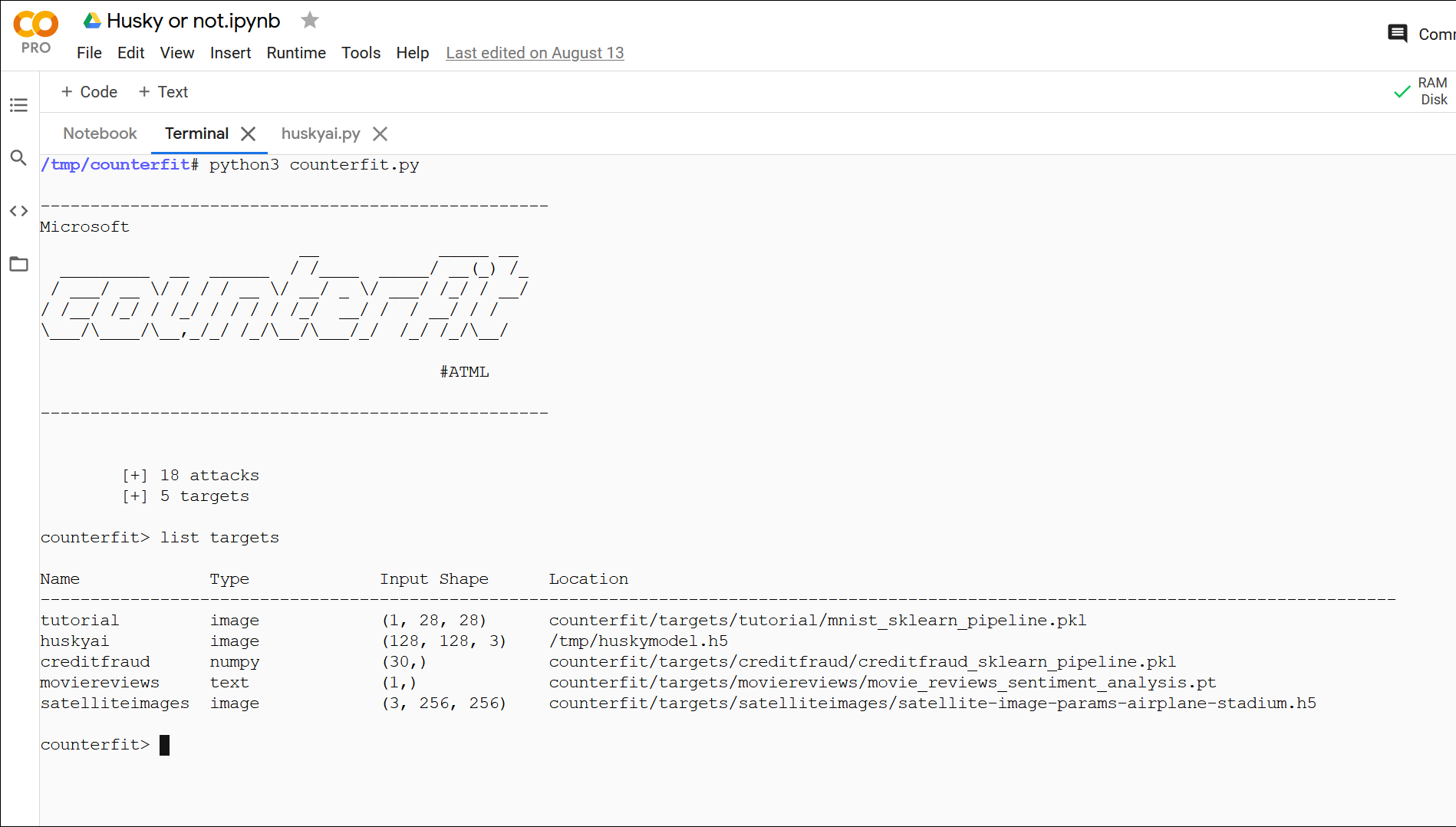 Out of the box there are two attack frameworks supported:

The focus now seems to be on “attack evasion”, and attacks that do not require access to model files and weights.

Hence, attacks such as Fast Gradient Sign Method or other techniques such as backdooring models are not (yet, I assume) present.

The Counterfit Github repo has instructions for a variety of install options.

I like using disposable environments (like Google Colab, too bad the free Azure Notebooks is gone). I ended up doing a quick “zombie” install via a Google Colab Terminal. I put the instructions for that at the very end, if anyone is curious, but it’s not that important.

Counterfit is a interactive command line tool, so it’s not designed to be used within Jupyter - at least I haven’t figured out a good way to use it from Google Colab Notebooks directly. A terminal is preferred.

The first step I investigated is how to create a new target, which is done via the new command: 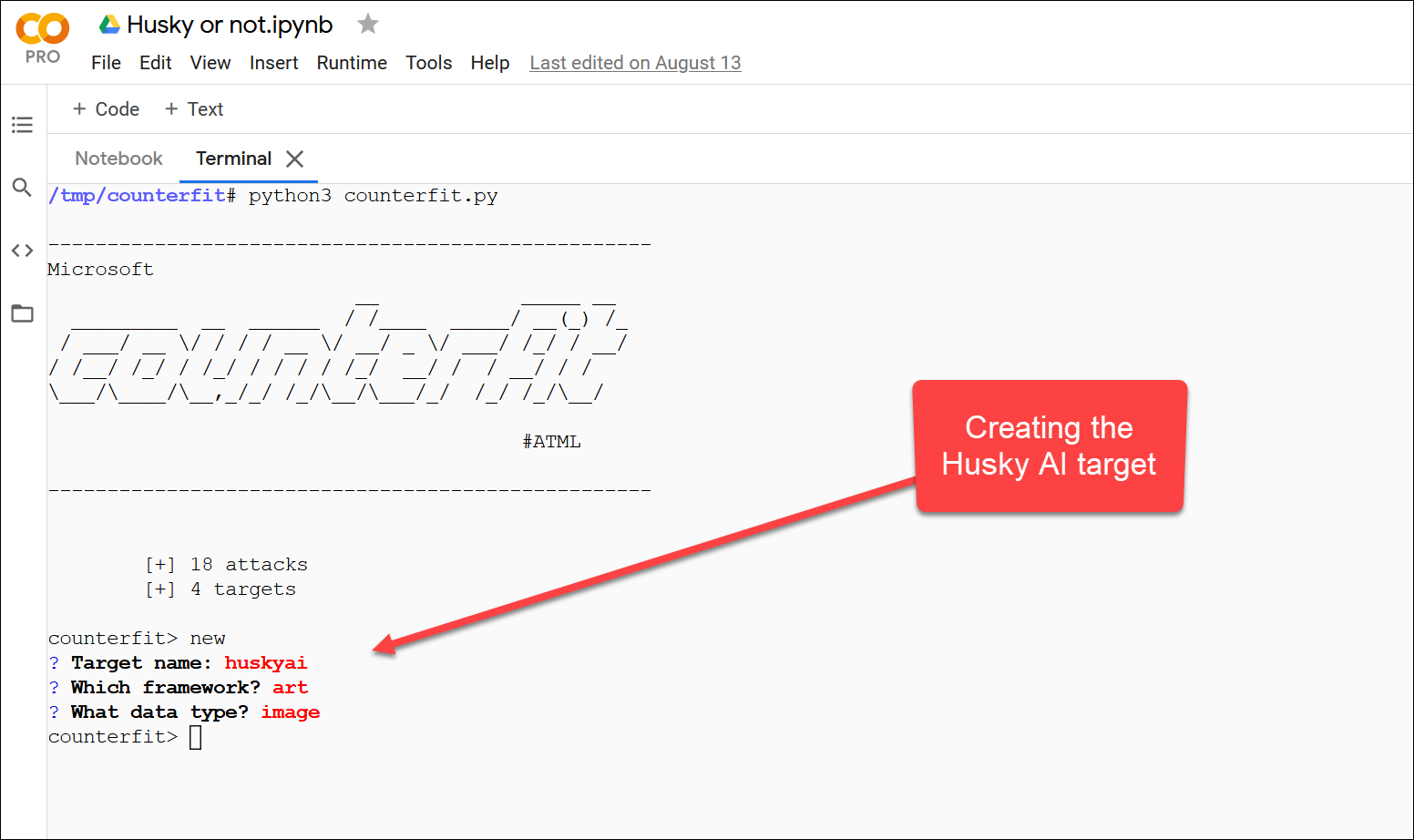 This scaffolds a couple of files that implement initialization and prediction methods for the target that counterfit can then call when needed.

Next I implemented the two mandatory methods for init and call.

I’m using keras to load a set of husky images via the ImageDataGenerator from the disk via flow_from_directory. That way I have samples to work with inside counterfit, and later can also add automatic image augmentation.

Additionally, my Husky AI target does predictions directly against the model. For real attacks, I want to call the Husky AI web endpoint. Which I will work on in an upcoming post. 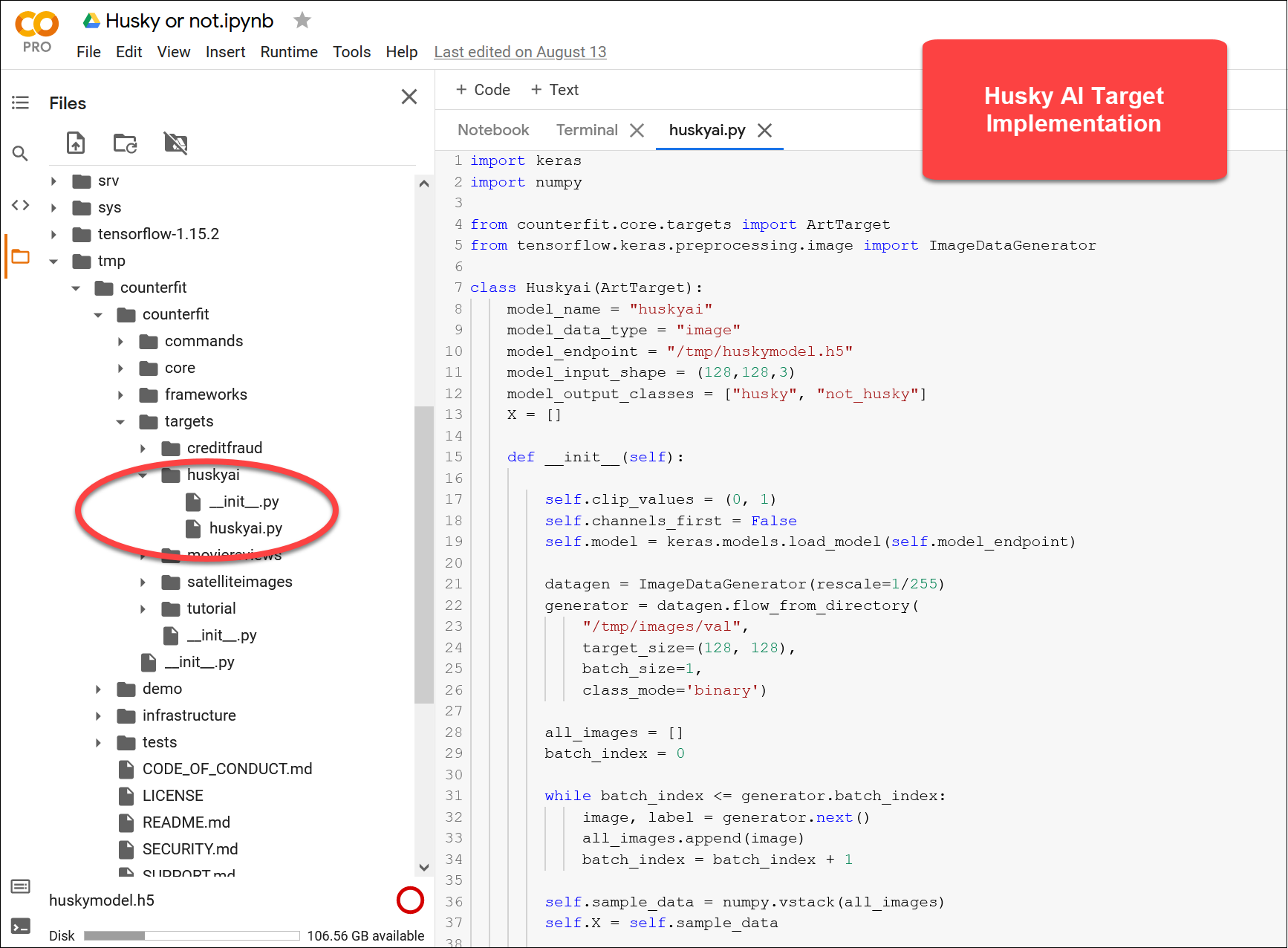 The complete Husky AI target implementation looks like the following:

The interact command is used to switch to a specific target.

Running a prediction and debugging

Doing a quick prediction on a specific sample in the set looks as follows:

You can see the outputted predictions scores, and a saved image of the processed sample. In this case the sample image at index zero is the “shadowbunny image” which we also used in previous Husky AI posts.

You can see it’s correctly classified as not being a husky.

There are some other useful commands to know, like reload. If you make changes to the target implementation that command will reload your code on the fly.

Now let’s move to the interesting parts of attacking the newly created targeted.

Our goal is to turn the plush Shadowbunny mascot into a husky!

First an attack framework needs to be loaded.

Next you can view all the available attacks via list attacks, and then use a particular one.

Like with Metasploit you can set options to change the default behavior of the attack.

To update the options and play around with settings, use set option=value.

The test is launched with the run command.

This is how it all looks in action:

The result files are in the results folder for both before and after attack.

For reference, this is the adversarial example the hop_skip_jump attack produced:

Easy to use and fast result. Pretty neat.

Here are some useful tips and issues I ran across that might speed up your experience.

Hope this intro on how to use it and my experiences implementing an attack target can help others bootstrap their efforts as well. It will be interesting to watch the project to see if catches traction and becomes more widely used.

The terminal is only available in the Pro version of Google Colab. 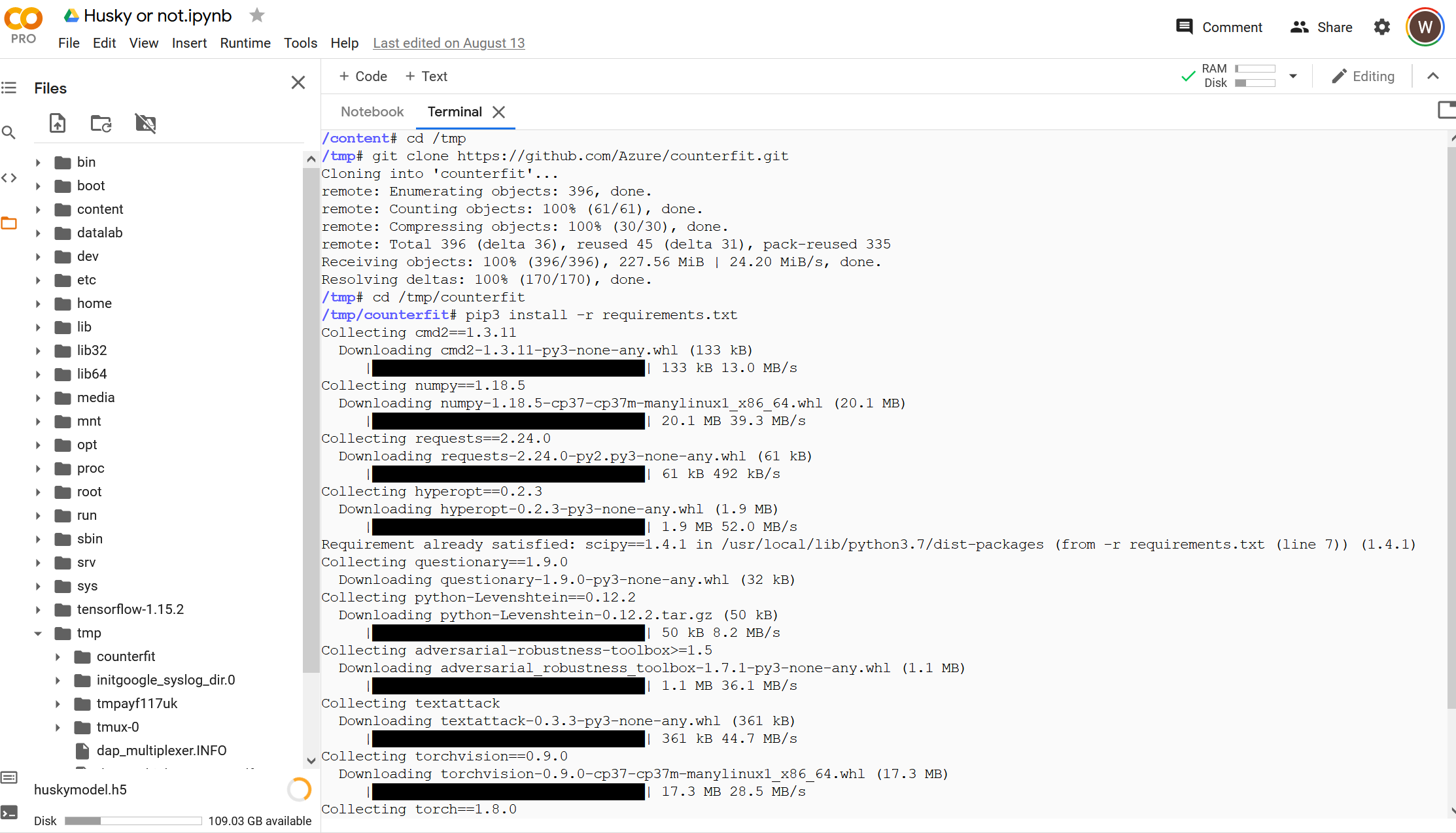 You can also use any images you have, it doesn’t have to be huskies.