This post is part of a series about Offensive BPF to learn how BPFs use will impact offensive security, malware, and detection engineering.

Click the “ebpf” tag to see all relevant posts.

So far in this Offensive BPF series the focus was on bpftrace to build and run BPF programs.

The next thing I wanted to investigate is what options are available to modify data structures during BPF execution. This is where I hit limitations with bpftrace.

There is a bpf helper function named bpf_probe_write_user that I want to use to manipulate data structures inside a BPF program.

Unfortunately, bpf_probe_write_user seems not available or accessible from inside a bpftrace program, so I had to go a level lower and write BPF programs in C.

There are a couple goals I have with overwriting user space data:

After spending some time reading up on things, libbpf and libbpf-bootstrap seemed good starting points for building BPF apps in C which then get compiled to BPF bytecode via clang. clang has a neat -target bpf argument that can be used for this.

libbp-bootstrap allows to quickly scaffold BPF programs. It uses libbpf and depends on BPF Compile Once - Run Everywhere (CO-RE). This requires a Linux kernel that is built with CONFIG_DEBUG_INFO_BTF=y.

To get started I enlisted the repo, built it, and then played around with the examples.

While doing so I discovered the following blog post which was super helpful in understand the technical details. There is another project I found called Bad-BPF by pathtofile that I used to understand how this all works. I’m not the first one exploring this (obviously).

To create my own BPF program, there are basically three files that make it up:

Inside the files I had to rename a few strings from bootstrap to obpf (like includes, etc.) and update the Makefile to make sure obpf gets built.

This is now where the knowledge I had acquired exploring bpftrace the last few weeks came in very handy.

I quickly understood what was going on. libbpf uses lower-level constructs and BPF programs are written in C compared bpftrace, which is an abstraction to write simple “script-like” BPF programs quickly. Hence, libbpf allows for more functionality and control, but means writing more code.

Here are some of the things that involve a little more work now.

With bpftrace maps where just simple variable names - there was nothing else needed. In libbpf we have to define structs now to hold the data, and use bpf_helper functions to update or delete values.

To give the example, I’m using the following map to allow sending pointers from sys_enter_getdents64 to sys_exit_getdents64 trace points:

This defines the structure of the map using the SEC macro.

Reading through Linux Rootkits Part 6 - Hiding Directories I learned that I needed to leverage getdents64 syscalls to access or manipulate directory listings. This is also needed if one wants to build a rootkit.

To get the arguments of the syscall bpftrace -lv tracepoint:syscalls:sys*getdents*.

The code to hook sys_enter_getdents64 is short - here is entire snippet:

The goal of this code is to store the pointer to d_entry in the map, so that in sys_exit_getdents64 we can access the pointer and read the directory information which was populated by then.

In comparison the following (much shorter) script is the bpftrace version:

With bpftrace we don’t have to define a map or anything - so it’s a lot less code!

BUT, bpftrace can’t overwrite user space data structures - which is what we need for a rootkit or modifying filenames, and I also noticed that navigating/iterating over structs is sometimes quite difficult with bpftrace.

So let’s continue on our libbpf journey~~~

Let’s walk through the code of the exit function.

First, I defined the hook point for the sys_exit_getdents64 trace point.

Next, we grab the thread group ID that we can use as identifier for the call going forward.

Following the same coding pattern from before with bpftrace we look up the pointer to the dir_entries from the map data structure. This is the pointer that sys_enter_getdents64 stored in the map.

After reading the value, we clean up and delete it from the map.

Next is the actual logic to loop through the directory. The code looks at each filename (d_name) and modify it using bpf_probe_write_user. I defined a bunch of variables that are used throughout the looping code.

ctx->ret is the return value of the getdents64 call and contains the overall length of the buffer, d_entry_base_addr is pointing to the beginning of that buffer.

BPF programs have limitations around their complexity. There is a Verifier that analyzes the program to make sure it executes safely.

These limitations are something I noticed quite often - so I had to limit the iterations to 256. To work around that we could perform a tails call to invoke a helper BPF program, but I wanted to keep it simple for now. Another thing is that it’s not possible to do dynamic allocation of memory, buffer sizes have to be known up front.

Another thing to highlight here is the debug prints using bpf_printk. In order to view these, you can cat the following file: sudo cat /sys/kernel/debug/tracing/trace_pipe during executiong.

The following part of the loop navigates to the next directory entry (d_entry) by adding the offset to the d_entry_base_addr and then reads the d_reclen and d_name (which is the filename) of the entry.

You can also read d_type and make sure it is not equal to DT_DIR (4) to skip directories and only manipulate filenames.

The next step is the logic to only overwrite a file that matches a certain string, etc. To keep the example here straight forward the code just targets every filename that is longer than 6 characters and overwrite the initial 6 characters with OhBPF using bpf_probe_write_user. :)

Finally, we increase the offset by the record length (d_reclen) to move to the next directory entry, and in case we reached the end of the loop we return.

The bpf helper bpf_probe_write_user is really what enables this magic experience. It allows to manipulate the data that user space programs see. 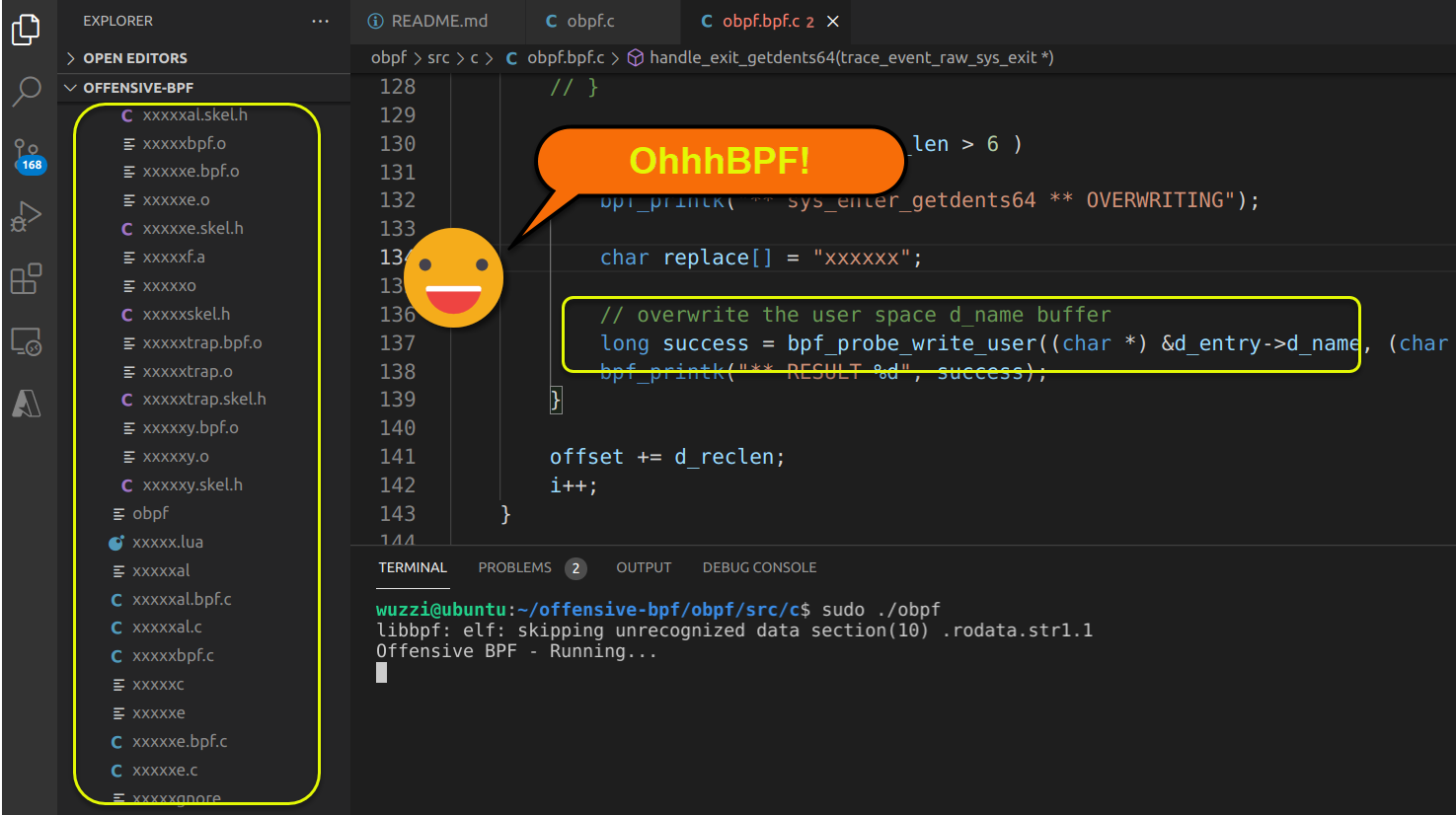 Although this program doesn’t do anything too malicious, it already points us to the potential for misuse of the bpf_probe_write_user function.

Luckily, whenever a BPF program invokes it, there will be an entry in the syslog.

Theoretically this can probably be bypassed by creating a BPF program that hooks the syslog syscall. As mentioned before tracking bpf syscalls is important as that is the source of the “BPF inception”.

In this post we moved on from bpftrace to writing “native” BPF programs in C using the libbpf-bootsrap framework to get started quickly.

We identified and highlighted the bpf_probe_write_user call to look for to identify suspicious activity.

This is the core source code of the BPF program discussed in this post. I will release the repo once I complete the Offensive BPF series - since there is still a lot of code churn and changes.