Pluggable Authentication Modules (PAM) on Unix based systems are useful to change logon behavior and enforce authentication via various means.

In “Red Team Strategies” the chapter “Protecting the Pentester” walks the reader through the configuration of a PAM module to get notified in real-time via a pop-up when someone logs on to the machine (e.g. system compromise).

But there are also bad things that can be done with PAM (especially post-exploitation) and this is what this post is about.

This post discusses a living-off-the-land PAM tactic that grabs passwords of logons, and we also discuss detection techniques.

Assume that during a red team exercise a Linux host was compromised.

Creation of the toomanysecrets.sh script

First, we create a bash script that will be invoked whenever a new authentication occurs.

The variables are PAM specific and will become available via the pam_exec.so module.

Here is the meaning of the variables:

To prevent all users from reading the file consider pre-creating it and running chmod, e.g.:

Now let’s plug this script into the PAM pipeline.

Next, the PAM configuration file needs to be updated the pam_exec module will be used to invoke the script.

There are various config files located in /etc/pam.d/, and we pick common-auth.

On the very bottom of the file, add the following authentication module:

The options have the following meaning: 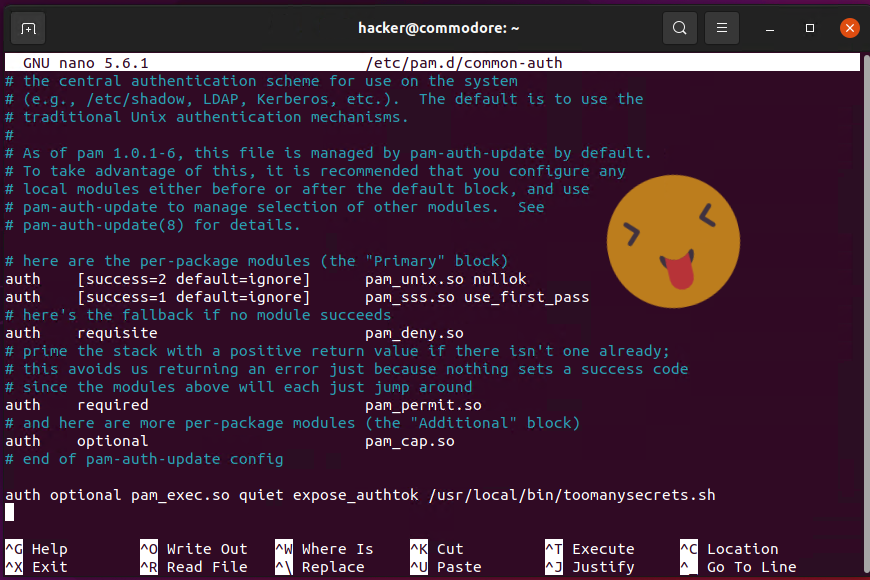 Logon and be surprised

Now, let’s try this out and ssh from another machine, or login locally.

Pretty neat, and tricky to catch.

PAM modules are powerful, they can be used to lock machines down add MFA to SSH sessions or notify the user when logons occur. However, the can also be misused post-exploitation by an adversary to do a variety of things, including as shown in this post to grab credentials of users.